Recognised as the most prestigious event on the luxury hospitality calendar, the Haute Grandeur Global Awards™ ceremony brings together a guest list of esteemed industry VIPs, influencers and personalities. The Awards celebrate the best hospitality experiences, recognizing the world’s most exceptional hotels, spas and restaurants.

Each year, top luxury hospitality brands vie for the ultimate accolade in overall excellence. Only the best of the best is awarded for exceptional achievement and greatest contribution to the industry.

“The hospitality industry is highly competitive. Only those who constantly exceed attain prestige,” says Haute Grandeur Founder and President, Marinique de Wet. “Healthy competition is essential to inspire excellence because it ensures sustainability in the most prosperous industries – those that create jobs globally. Association with Haute Grandeur guarantees participating establishments status and distinction. We are proud to contribute to raising the standards of excellence in hospitality worldwide.”

In the world of Award initiatives, Haute Grandeur is unmatched. Excellence is recognised through feedback from guests and not quantity of votes by the general public or a panel of judges. This fair and transparent process guarantees unbiased results – a concept exclusive to Haute Grandeur.

“The Awards inspire even greater success in already remarkable hospitality establishments and set a new standard of excellence,” says De Wet. “The Haute Grandeur Global Awards™ is more than just a celebration of our dignitaries’ achievements. It honors the principles of hard work, commitment, determination, leadership and success.”

“To win a Haute Grandeur Award an establishment must excel on all levels”, says De Wet. “Haute Grandeur Global Awards are recognised as a guaranteed golden stamp of excellence, with associated establishments perceived as the benchmark in the industry. By awarding only the most remarkable, Haute Grandeur inspires already exceptional hotels, spas and restaurants to achieve even greater heights. So, the winners have truly attained the ultimate in excellence, recognized with the highest accolade.”

The highlight of the evening was the announcement of the overall winner for 2018, Five Palm Jumeirah Dubai. Set on Palm Jumeirah, Dubai’s most iconic location, the hotel is celebrated for its inspiring guest experi- ences. This lifestyle hotel combines contemporary architectural design with intuitive personalized service, bringing luxury, glamour and outstanding hospitality to the jet-set social scene of the city.

“It was a great honor for us to host this prestigious Awards event”, says General Manager of Palazzo Versace Dubai, Sandra Tikal. “The night was a great success. The Awards recognize the people who work with unwavering dedication to excel and reflects our commitment to excellence.”

Association with Haute Grandeur guarantees participating establishments global recognition, distinction, credibility and influence. The Awards are revered as the highest accolade in hospitality – a promise of unparalleled service excellence.

The Munro Boutique Hotel was crowned winners at the prestigious Haute Grandeur Global Awards - Most magnificent in Hospitality -Gala Ceremony held last night at the Palazzo, Versace in Dubai.

Association with Haute Grandeur guarantees participating establishments global recognition, distinction, credibility and influence. The Awards are revered as the highest accolade in hospitality – a promise of unparalleled service excellence.

Owner of The Munro, Mark Kaplan and our GM, Margie Varney, were there to receive our award in these categories:

GLAMOUR'S most GLAMOURous at The Munro!

GLAMOUR'S most GLAMOURous at The Munro!

BLK OPL launch with Somizi at The Munro! 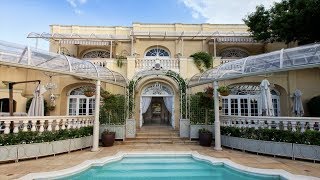